Commits to Queen's University in Kingston, ON 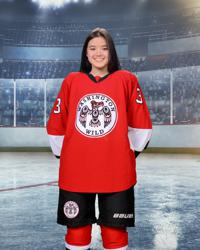 What were your school activities and community interests:
Drawing and as for the activities, I sometimes volunteer as a student coach in the Learn to Play class and other WWFHA held hockey events.  Last summer, I volunteered as a conversation buddy for students who wanted to learn English.

Did you earn any school awards?
I was on Honor Roll and received an Honors Society certificate.  I will graduate from my school's International Baccalaureate program.

Where do you plan to go study and what do you plan to study?
I am going to Queen's University in Kingston, Ontario, Canada.  I was accepted into the honours science program.  I am still not sure what I want to focus on, but I enjoyed chemistry the most.

Do you plan to play hockey for the school or for the community while going to college?

Yes, I will probably play for a community team.  I had so much fun with this team that I would like to keep on playing this sport.  But because I want to focus more on school, the hockey activity is probably going to be more low-key compared to my years here.

What are you most excited about or looking forward to at college?
I am looking forward to meeting new people and moving to a new place.  Additionally, I would like to start something new that I haven't tried yet....don't know what it's going to be though.

What do you like about your Washington Wild team, the players, and the coaches, as a player?
I think that the atmosphere that the team has created embodies a similar idea to a family.  We each get really close to each other and support each other in any way possible.  The environment that the team has created, I think, is very welcoming and enjoyable to be in.  As for the coaches, they have really provided me with many pieces of advice regarding mostly hockey.  Despite these pieces of advice focused more on hockey, some of these could be applied to real-life situations, such as leadership.  They have really helped me grow into the player that I am and I am very thankful for that.

What was the most memorable moment or time while playing with WWFHA?
I think that the most memorable moment for me was the MLK tournament in 2017.  This year, we won the championships, thus bringing back the banner.  Also, I think, this was the tournament that all of the team became a whole.  We worked remarkably amazing together on and off the ice; we created memories which when I think back now, brings a smile to my face.

What did you enjoy about the WWFHA organization as a player?
I think that Zoe really provided much information, especially with colleges.  Also, the many speakers that the WWFHA has brought were very interesting to listen to.  Furthermore, I think I enjoyed watching the organization grow so much over the 5 years.  The organization started with 3 teams when I first joined, and now there are many teams and many younger girls who want to try out hockey for the first time.  This organization has provided so many opportunities for girls who want to play hockey.

What would you say to parents/players who want to play college hockey?
I think that the most important thing to do is to do well in school.  The higher the level of hockey, I think, the higher the level of the school.  For example, a lot of the D1 schools are demanding schools that expect their students to keep up with their excellence in academics as well as in their dedication to the sport.  Another important thing to note is to remember to select your choice of college mainly on these factors: majors and college environment.  If you only go to college for the hockey, what will happen if you suddenly can't anymore, say because of an injury?  Thinking about how you would like the school as if you will not play hockey is important.  Another important note: Try your best (100%) when playing every game and have fun!

Thank you, Aimee, for your positive impact on WWFHA! Best of luck to you at Queen's University in Kingston! Go Wild!