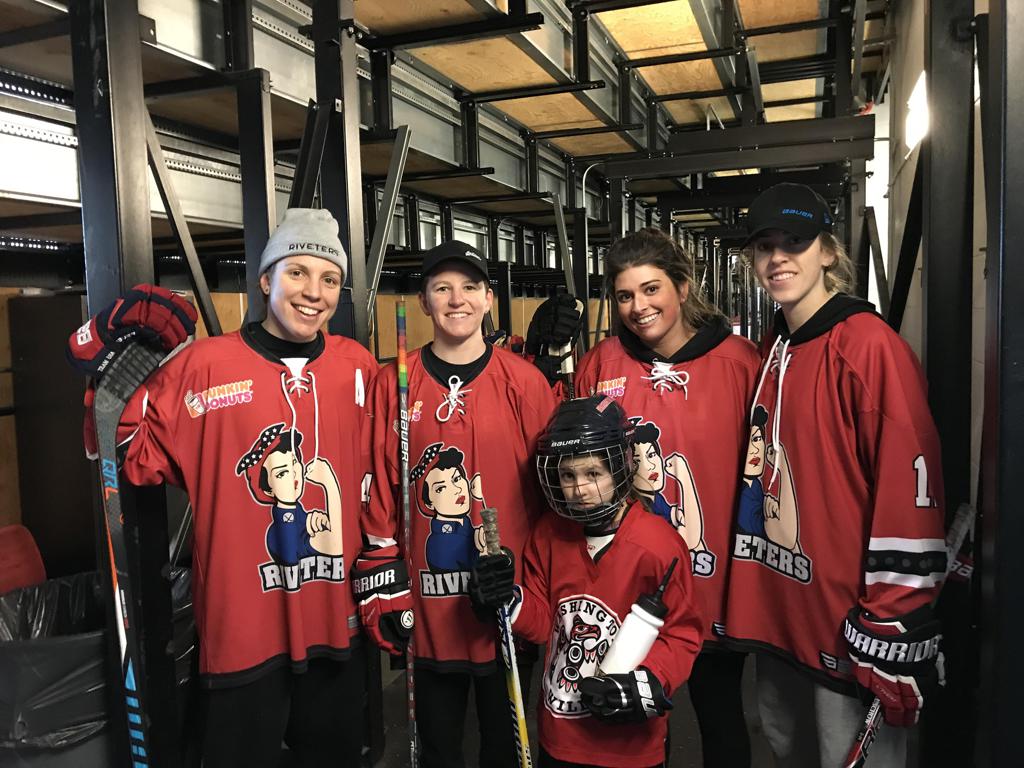 Fifty female players attended the event, where players moved through a series of stations in the ADM-style practice. Violet skated with the pros in front of her grandparents! While originally worried she would be the slowest and smallest on the ice, she quickly realized she fit in very well, and she later said she had a great time.

April says, “For Violet to say that she had fun, was happy to be there, and was glad to meet and skate with some amazing players really speaks volumes, as she is typically quieter with her communications. She also tends to be challenged in loud, overwhelming places, or when meeting new people in foreign places. It was a big achievement for her on so many levels, and we are thrilled she enjoyed it.”

Michelle Picard quickly recognized Violet’s Washington Wild sweater and zeroed in to say hello. Violet was particularly excited when she participated in a 2-0 drill with Rebecca Russo – 2011 National Champion with Shattuck St. Mary’s, former NCAA D1 Boston University player, and now forward for the Riveters -- who recently played in the NWHL All-Star Game.

Violet’s dad Mike says, “Besides the ‘Wow, my kiddo is getting to skate with Olympian and professional hockey players!’ aspect of the event, I really enjoyed seeing the variety of kids and the teams they represented there (Violet was the only Washington player of any sort), that the Riveter players were so friendly, and that everything was put together in such a way that everyone seemed to be having fun.  We managed to grab one last picture as the players were leaving the ice (though Violet’s expression is totally ‘No more pictures, Dad!!’), and thanked them all for the wonderful time.”

Later, the family attended the Riveters vs. the Buffalo Beauts game. The Riveters lost a rare game 3-4; however, they still hold the best record this season (12-2 compared to the Beauts 10-4).