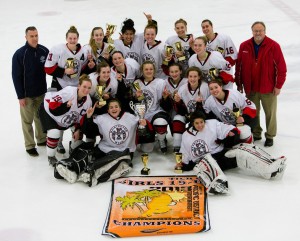 Anaheim, CA — The Washington Wild 19U Rep team took first place at the 2013 USA Hockey Pacific District Tournament, earning a berth in the USA Hockey Nationals for the first time in association history! In round-robin play, the Wild defeated Team Alaska 1-0, Lady Pioneers (Palmer, AK) 4-2, and Pasadena Maple Leafs 8-1, to earn the #1 seed in the finals.

The Wild faced Team Alaska in the Championship game and shut them out 2-0, which earned them a spot in the USA Hockey National Championships in San Jose, CA — April 3-7, 2013.

The Wild were undefeated in the Pacific District Tournament where they outscored opponents 15-3 and tallied two shutouts. The team also worked together to secure the top 4 scorer positions and the top 2 goalie slots in the 19U AA Division.

Congratulations to the team, coaches, and parents, and best of luck at Nationals!